In 1916, Douglas Aces was a sparsely settled section of northeast Des Moines. There were few cars, no street lights, no city water, no DART bus service, no paved roads, and no church.

Some people who live in the area wanted a church. After some planning, they meet together as a group in Wright’s Grove. At this meeting, a pastor and a conference superintendent of the United Brethren Church were present, and a Sunday School was organized which later became Galilee Church.

Meetings were held in member’s homes. John Adams School (at 29th and Douglas), and a store building. During this time the dream of a permanent church building inspired the congregation to begin a building fund.

A site for a church at the northwest corner at East 28th and Madison was given to the congregation. The group began looking for a building to move to this location. A brown frame school building was purchased for $258.00 and moved from east 15th and University, the present site of Amos Hyatt Middle School. While being moved, it got bogged down in the muddy flats near the corner of Easton Boulevard and Hubbell Avenue and had to be left until the ground dried. Windows not broken in the move fell victim to slingshots of neighborhood children, and could not be quickly replaced. The windows were boarded up and a stovepipe thrust through one of the boards. If the stove smoked too badly, it was carried outside into the yard and the service continued without heat. The basement had a dirt floor and there were issues with the pews. the hard benches (which were cast offs from a richer congregation) were of the folding type and so constructed, that is disturbed, would collapse simultaneously unless enough people were seated.

Growth through the years caused the building to become inadequate. A new building was built on the same location in 1926 at the cost of $8,337.00 and was dedicated on December 5, 1926. It was renamed Sarah J Staves Memorial Brethren Church in memory of a prominent United Brethren laywoman and founder of the Women’s Missionary Society. At the time of incorporation, it was shorted to Staves Memorial United Methodist Church.

In 1946, church members spoke with Dr. Fred Staves about using the recreational grounds for the church as the construction site for a new church. Dr Staves agreed to the change and in 1957, construction of the present church building began. Members of the congregation did much of the finish work on the church. On April 13, 1958, the current church was dedicated. On March 8, 1959, the Grace Staves Memorial Chapel was dedicated.

In 1965, the First Evangelical United Brethren Church closed its doors and Staves Memorial United Methodist Church was fortunate to receive many of its members into our congregation. The “new” congregation received $20,000.00 from the sale of the First EUB Church building, and this money was used to start a building fund for the new education wing. The cornerstone for the EUB building was purchased and sits on the Staves lawn. A memorial garden was built in 2002 and the EUB cornerstone has a place of honor in that garden. A parsonage was added to the property in 1965 as housing for our full-time pastor’s and their families. The parsonage was dedicated on September 19, 1965. 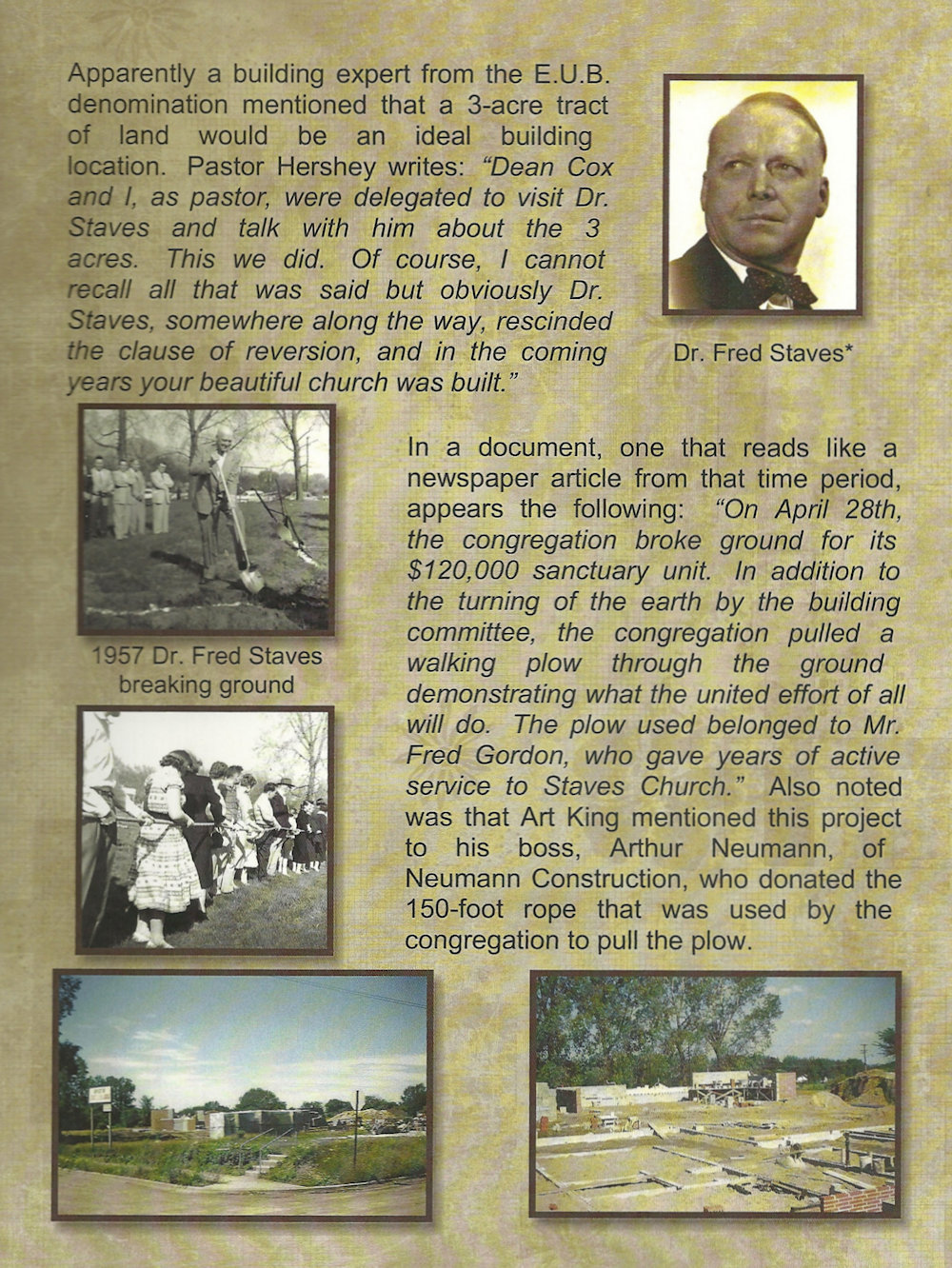 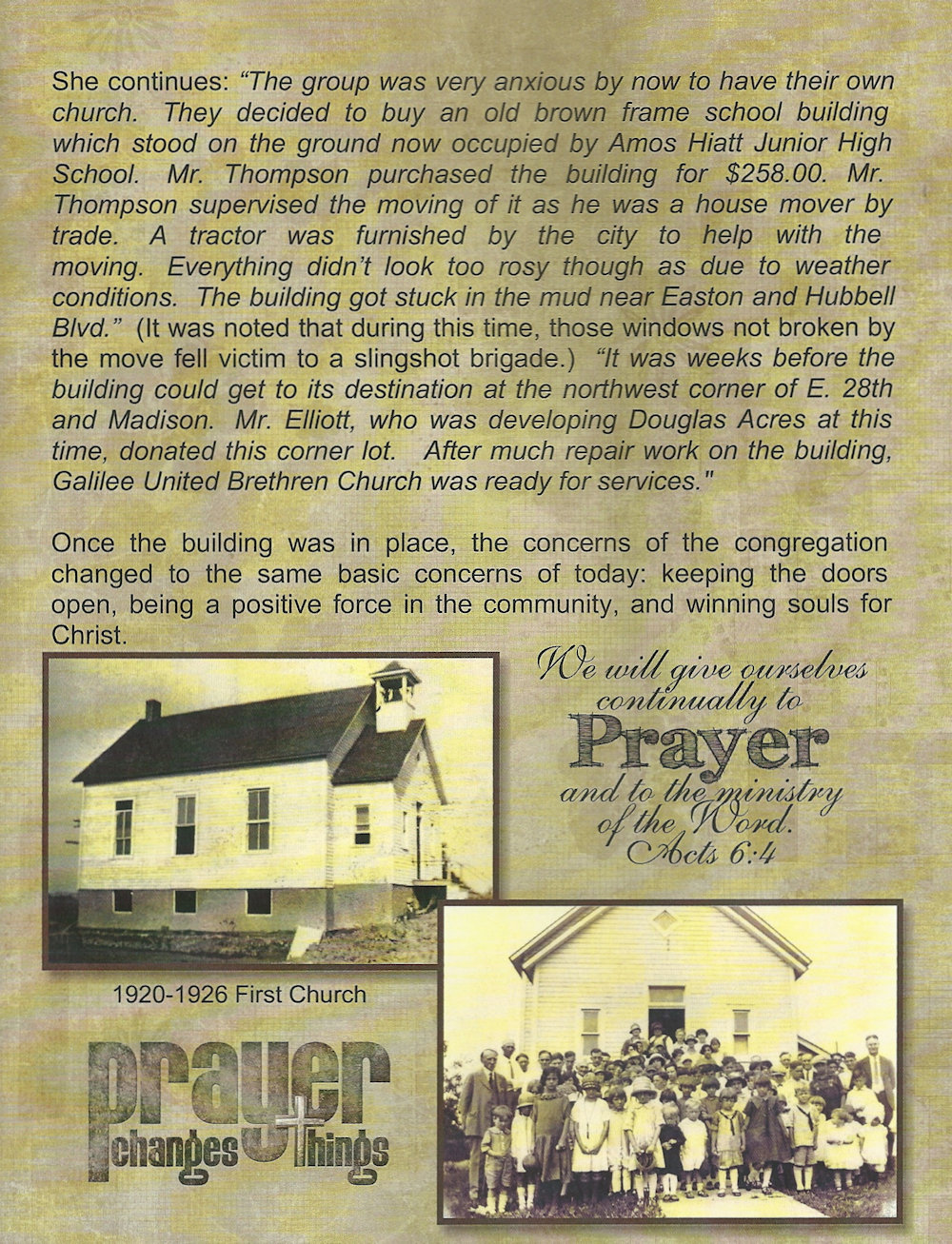 The current education wing for Staves was dedicated on February 20, 1972. The two-story addition included several Sunday School rooms, a nursery, a fireside room, offices, and the current choir and bell choir practice rooms.

In 1980, a church van was purchased to help with the transportation of church members and to provide outreach to more of the Des Moines area community. that van was replaced in 2000 with the purchase of a new van. Our vehicle fleet expanded in 2008 with the purchase of s small bus with handicapped access.

A Miracle Sunday was held in 1989 to help kick-off the campaign to purchase are conditioning, a new roof, new furnaces in the education wing, insulation, and a new office computer. New choir robes were also purchased.

Since then many other improvements have occurred at Staves. Some of those improvements include new carpeting in the Sanctuary, new tile flooring in the fellowship Hall, Narthex, and kitchen, new pew cushions, multiple resurfacing projects for the parking lot, new roofs, additional window coverings added to cur the cold drafts, new lights for cost savings, and new paint on interior walls. A playground was built for neighborhood use, which nicely hearkens back to the original use of the Staves property as a recreation ground.

Go therefore and make disciples of all nations, baptizing them in the name of the Father and of the Son and of the Holy Spirit, and teaching them to obey everything that I have commanded you. (Matthew 28: 19)

The need for Staves is still important. Before joining His Heavenly Father, Jesus gave his disciples two commands to “go and make disciples and baptize in His name” (Matthew 28:19). Our building, grounds, and more importantly the members help each and every day to carry out these commissions. We look forward to another eventful 100 years of reaching out to the community and carrying out these important commissions. Staves members are involved in many ministries and outreach programs, see our Ministry tab for more information on these programs.